In search of perspective

Now that the Covid-19 management regime is well in place, its timely to reflect on life in lock down. I previously touched on the causal links between isolation, anxiety, and the immune system. I also mentioned how the response globally of governments seemed to be out of proportion. When 164,000 people die every single day of the year, of course we want to be sensitive to those grieving, whilst also acknowledging that life and death are both parts of the same miracle of our time here on earth.

We know that when we are anxious, the older (and faster) parts of the brain which are more reactive and habitual, tend to dominate our behavior, but when our nervous system is in its ventral vagal state (without stress), then we are much more capable of curiosity and critical thinking. So while this whole virus thing can make us anxious, lets see if we can't try to make some sense of whats going on.

Things we saw out and about: 300m supermarket queues, food shortages. Some envisaged this, but that its actually happening still comes as a surprise.

Firstly, in talking to everyone we encounter about the lock down, a very common refrain is something to the effect of "we'll just have to wait and see what happens". Turns out this is a phenomena called rational herding: "Imagine you're in the movie theatre... and people suddenly start racing for the exits. You have no idea why. Do you go too? The idea is that if you don't have perfect information about what to do it often makes sense to imitate others around you." So, if you find yourself accidentally surrendering your rights just now, this is maybe why.

Now, we made a trip out into the world to pick up groceries, and we observed two interesting things. The first was the epic queues outside the liquor stores. The lines we saw were around the block then around the next block. A little thought, later confirmed, shows that many isolated people are self-medicating. The second thing was, in attempting to locate some garden supplies, apart from food and chemists the rest of the shops were completely shut (and there are practically no online sales either). My thought was, straight away, with a shudder, what is going to happen when people start to run out of things, the little everyday things that make society tick? 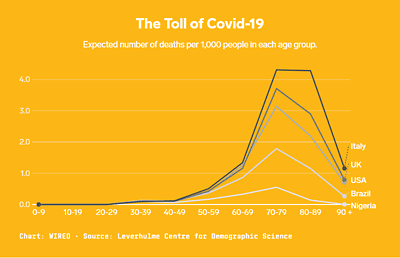 I'm a numbers guy, and as South Korea seemed to be keeping good records and their infection rate had peaked, i decided to try to get a sense of the true impact of this virus. We need to just forget about the number of cases and the endless arguments about the mortality rate of those infected, as these are both incredibly mushy due to testing accuracy and methodology. So lets look instead at the total death rate per capita: 0.00010% of Korea's population died of the virus. But, ok, people then started asking me: yeah but what about Italy? Ok, so its a bit higher: 0.025%. The moral of the story? If you are in the one quarter of one tenth of one percent of the population with the worst immune health, then sure go ahead and be concerned about Covid-19.

But why is Italy's infection rate higher than others? Maybe its because Italy has the second oldest population in the world, Italy's median age is 47, US/NZ are around 37. And we already know that the virus hits the elderly the hardest. An Italian study found that "the average age of those who died from the disease stands at 79.5...[and]... more than 99% of the country's coronavirus victims were patients who suffered from previous health issues". So, while it may not be politically correct to say it, the conclusion that seems most logical is that everybody has to die of something, and that whatever is going around is likely to be it. In this case its name just happens to be Covid-19.

A Brookings Institute study raises another interesting point, that the true mortality rate is difficult to assess, not least because the pandemic management may itself be causing fatalities, eg stress and loss of social support for the sick and fragile. This point was not lost on us as a friends frail mother with not as much support as she needs right now, is 3 hours drive away. Its generally thought that are four main causes of increased deaths during economic recessions (make no mistake this is what's coming), suicides, drug overdose, inadequate medical support, and malnutrition/homelessness. If we just look at suicide alone, an analysis of the 2008 recession showed a 5% increased suicide rate that extended for a 3 year period, which with some back of the envelope math equates to 120,000 suicide deaths globally as a direct result of this present drama. Add in the other causes and this figure could go into the millions.

On the other hand, ironically, the lockdown may also be saving lives. The above Brookings study estimates that in China the virus may have saved 20 times the number of fatalities from reduced air pollution.

Ok, so enough statistics. There are not too many voices of calm out there just now. For local writings check out Barbara McKenzie's Open Letter to NZ MPs, the Lockdown is a Disastrous Error and   Covid Plan B. These articles at Global Research 12 experts questioning the coronavirus panic, and First do no harm are not a bad place to start. John Bergmans youtube channel has good stuff, as well as much holistic health advice. 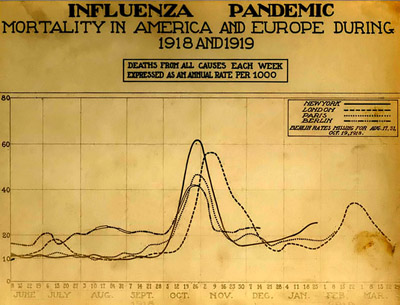 Thomas Cowan has some interesting ideas about viruses derived from the writings of Rudolph Steiner. Here he talks about the importance of childhood illness in forming the immune system, and here about a probable connection to the recent increase in radio waves in our environment, and exacerbation from aluminum adjuvants. Edit: it appears youtube is removing his work. If so try the mirrors here, here.

And on a related note, Arthur Firstenberg wrote a book called the Invisible Rainbow, which documents the rise of EMF in our environment. In particular he studied the 1918 flu epidemic, and notes a significant correlation with the massive sudden adoption of primitive but powerful radio aparatus as a part of the war effort. He also started the 5G space appeal which is sobering reading. As an aside many NZ'ers will have seen the spectacular Starlink satellite launch a few days before the lock down.

Various sources suggest that the disease and/or policy response to this pandemic could drag on for more than 12 months (as did the 1918 epidemic). So we have plenty of time to digest the consequences of it, and try to make meaning for ourselves and our communities.

So there is a storm coming. But what exactly are we to do with these (likely disturbing) ideas? Remembering that we are wired to worry, it's super important that we put this into a bigger perspective. One way to do that is with the 3:1 rule, which is to balance every bit of bad news with at least 3 bits of good news.   For those in lock down, 3 lots of good news right now could be as simple as enjoying the time to slow down, spend more time with our loved ones, to get some sunshine and healthful exercise, and maybe even plant a garden. Ok so that's 5 (better safe than sorry :)

Our vision is for a world where people live mainly from a ventral vagal state, a place of safety. This model takes personal well being and extends it to group well being, which further leads to geo-political well being. So, yes this could take a little while. In the mean time, I can but say, paraphrasing Steiner, that because it's harder to be human at times like this, we must call upon an even more enhanced connection with spirit in order to face the challenges ahead. Or to put it another way, even in the face of these events, or especially in the face of these events, it is so important to find a way to remain unconditionally positive about the future, about our belief in our bodies ability to heal, and about the healing power of our connections with each other. We can weather this storm, together.