Isolation is a health hazard 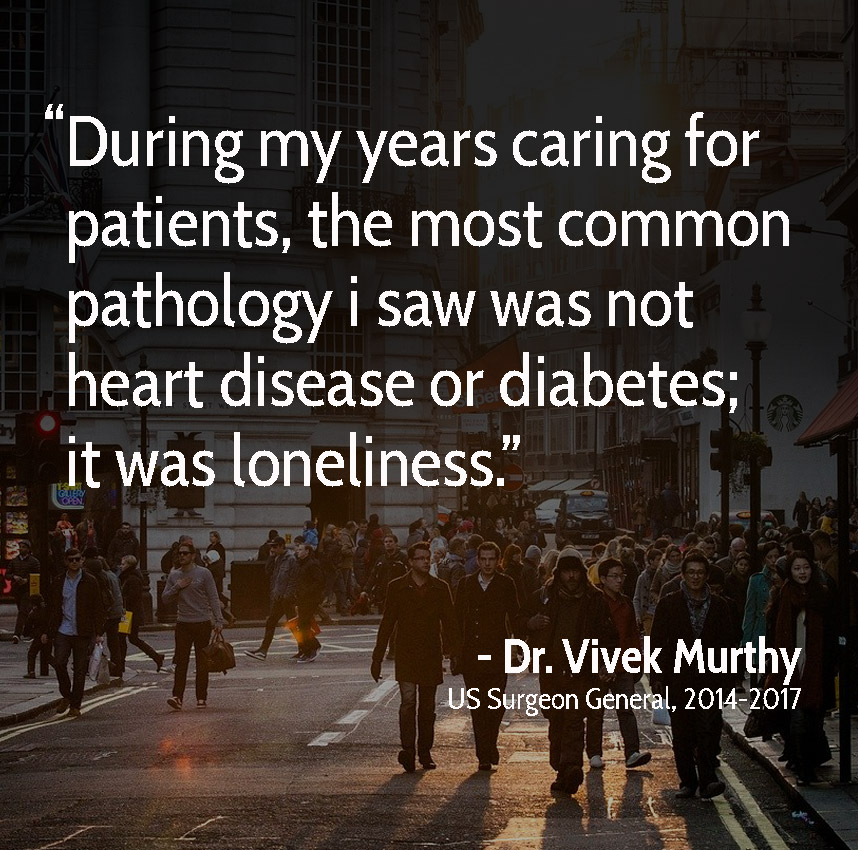 This 'pandemic' requirement to 'stay safe - stay at home' has been dramatic and certainly unprecedented in our lifetime. Among the social problems, for us, a few stand out. Like, what happened to families that weren't able to celebrate important life milestones, such as births and deaths? What happened to those who ended up having to isolate with people with whom they have less than healthy relationships? What about the people who had to self-isolate on their own?

Today I want to discuss the fundamental problem with isolation, from an evolutionary point of view. Isolation, loneliness, and living alone are a related trio of phenomena that have attracted quite a lot of research over the years. Even without the lockdown, the social sciences have been telling us for some time now that loneliness and isolation are trending upwards, and have actually reached a post-war all-time high.

Hot off the press is a large 2020 study by a big health insurer which warns that nearly half the US population feels lonely and don't have people to draw on for support when needed.

42% of US adults have no partner. Here in NZ while the data is less robust its suggestive of a similar trend.

"The most recent U.S. census data show that more than a quarter of the population live alone the highest rate ever recorded. In addition, more than half of the population is unmarried, and marriage rates and the number of children per household have declined since the previous census. Rates of volunteerism have also decreased, ... and an increasing percentage of Americans report no religious affiliation suggesting declines in the kinds of religious and other institutional connections that can provide community", source.

When we look at the impacts, the research shows that this lack of social connection heightens a broad range of health risks, reportedly as much or more than each of smoking, obesity, and physical inactivity. Lonely people: die younger; eat, sleep, and exercise less well; drink and overwork more; have more heart disease, depression, and dementia; and they think less clearly, have less executive control, ie self-regulation, source.

For me all this starts to make sense when we understand Polyvagal Theory, which gives us a direct link between the ventral vagal state and social connection. What Steven Porges calls the Social Engagement System is a large package of nervous system functionality designed to manage relationships. These tools, such as facial expression, tone of voice, posture etc, exist precisely because we evolved to live and work in groups of people. That's where we find safety and comfort. 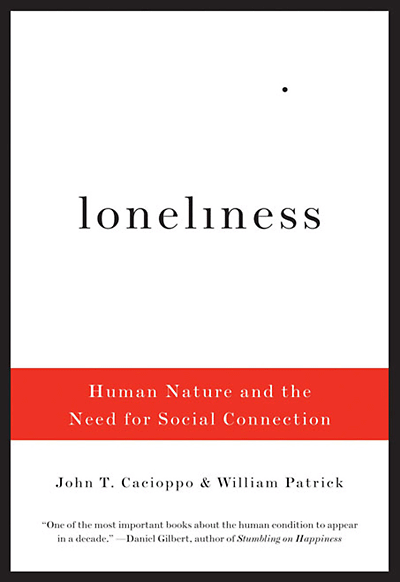 In order to understand why isolation is hazardous to our health, we need to turn to the work of neuroscientist John Cacioppo, who carried out a ton of original research into the subject over three decades.

The origin of loneliness

The pain of loneliness, Cacioppo says, evolved to remind us to pay more attention to our social bonds, bonds that are essential to our safety. Lets look at how this works.

Charles Darwin famously championed the idea of biological individualism. But when he had to explain things like: bees die when they sting; worker ants that do not themselves reproduce; prairie dogs that draw attention to themselves when they warn the pack of an approaching hawk; and apes that spend large periods of time grooming, he was forced to concede that such facts were "fatal to his whole theory" of survival of the fittest.

Anthropologists in general note that hunter gatherer groups all develop a high degree of social cooperation. For the men it is about the ability to hunt larger prey. For the women its about sharing of maternal duties allowing them to get other things done.

And, because humans only have one baby at a time, the survival of each infant is of high importance. As humans evolved, increased intelligence lead to larger heads, which lead to babies being born half developed, which lead to a prolonged period where the infant remains profoundly dependent.

This long dependence stage brought about infant - caregiver attachment bonding. Then, the odds of survival increased by enrolling the caretaking support of the father, which brought about pair bonding. Finally we gained further survival advantage by banding together in groups. Because the group meant safety from predators and warfare.

The net result, whether it suits our modern independent sensibilities or not, is that we have an inbuilt genetic expectation that social connection equates with safety.

"Human beings evolved to feel safest in groups, and as a result, we experience isolation as a physical state of emergency", source.

"[We] evolved to live in a tribe and if you think about the circumstances where we evolved if you were cut off from the tribe, you were anxious for really good reasons. You were in terrible danger, you were about to die. Those are still the impulses we have, we are the first humans ever in the long 2 million year history of our species to try to disband our tribes, and its making us feel awful." (Johann Hari discussing Cacioppo's research: The loneliness epidemic)

"If you were to spend the night in a Kalahari village and see lions' eyes gleaming in the darkness just outside the ring of cooking fires, you might begin to appreciate why, for early humans, feelings of isolation were linked with fear, the fear that still remains at the core of our experience of loneliness", Cacioppo.

The paradox is that while we have altered our living environment beyond all recognition, with technology and wealth, our physiology and nervous system have remained completely unchanged.

But as civilization advanced, and cities spread across the world, our evolutionary interdependence became a layer removed from our awareness. With money and specialization we could buy our way out of traditional social alliances. That we now celebrate individual achievement, was made possible by the industrial revolution, and before that by protestant theology. But somewhere along the way we lost something important, and people are starting to notice.

Notably, in 2017, the US Surgeon General Vivek Murthy warned that Americans are facing an epidemic of loneliness and social isolation. In the UK, that same year, a ministry for loneliness was established by MP Jo Cox.

"Scientists examined the impact that social isolation, loneliness, or living alone have on mortality. They found that all three have a significant and equal effect on the risk of premature death. You can live alone and have a wide social network, and yet living alone carries just as strong as a prediction of risk for premature mortality as loneliness and social isolation", Julianne Holt-Lunstad.

The data reveals that people who feel lonely do not differ from the non-lonely in terms of height, weight, gender, age, nationality, education, beauty or intelligence.

Isolated people who report as being happy alone, usually test positive on the UCLA loneliness scale. This loneliness is hidden from consciousness as part of an attempt to self-regulate the pain of feeling disconnected.

Cacioppo found that there is also a genetic component that determines the extent to which you suffer isolation. This possibly explains introversion, which is something that can be tested for at birth.

Basically isolation causes a stress response, and thus sympathetic activation. It tends to occur over long periods, and thus a source of chronic stress. It is also possible that it is the mother stressor. Interestingly, lab testing suggests that loneliness is not the result of but the precursor to a family of other issues such as shyness, anger management difficulties, anxiety, low self esteem, mood disorders, and lack of optimism.

"Loneliness creates a subtle but persistent difference in cardiovascular function that sets the stage for trouble later in life. This finding, combined with the fact that loneliness can persist and remain stable through the years, means that its negative effects on health, even the subtle ones, have plenty of time to accrue and compound."

Ive talked about our brains negativity bias previously, and it applies here also: "If I make an error and detect a person as a foe who turns out to be a friend, that's okay, I dont make the friend as fast, but I survive. But if I mistakenly detect someone as a friend when they're a foe, that can cost me my life. Over evolution, we've been shaped to have this bias", source.

So vigilance is ordinarily somewhat a part of the human experience. But isolated people are shown to to be even more so. With isolation comes hyper-vigilance. The constant watching out for danger, seeing monsters in the shadows.

"You dont hear people talking about loneliness, that's because loneliness is stigmatized... This is unfortunate because it means we are more likely to deny feeling lonely, which makes no more sense than denying that we feel hunger thirst or pain." (Cacioppo's Ted talk The lethality of loneliness)

Loneliness has a nasty catch: relief from loneliness requires the cooperation of others, and yet the more chronic the loneliness, the less able we are to attract such cooperation. Frustration with this situation can trigger depression and hostility, and impair social perception. "These failures of self-regulation, combined with the desire to mask pain with whatever pleasure is readily available, can lead to unwise sexual encounters, too much to drink, or a sticky spoon in the bottom of an empty quart of ice cream."

You can't just throw people together and hope that we will care for one another. We need safety in order to connect, and we need connection in order to feel safe. So which comes first?

And, if we recognize that for the most part night clubs and tinder are basically an ill-defined desire for human connection, then we can start to understand how to more consciously find and build healthy relationships.

Studies showed that people with social oriented goals, as opposed to self or material improvement goals, leads to increased life satisfaction, source.

Cacioppo's research shows that we have three distinct levels of connectedness requirements: intimate (pair bonding), familial (family and friends) and collective (the need to belong to a tribe or society).

Our conscious attention is the key. Robert Waldinger from the Harvard Study of Adult Development (the longest ever longitudinal social study at 80 years so far) said: "Our research from the study continues to show that warm relationships dont just matter, theyre vital. Our long-term health and happiness are tied to the strength of our relationships."

"Good relationships keep us happier and healthier. Period... Social connections are really good for us, and that loneliness kills... People who are more socially connected to family, friends, to community are happier, they're physically healthier, and they live longer. And the experience of loneliness turns out to be toxic." Waldinger 's Ted talk is very good.

Relationships are messy, they are complicated, they stir things up, and it is lifelong work. Its about face to face time. Its about meaningful connections. And connection is about vulnerability.

Humans are gregarious by design. Yet in recent times, the sad fact is that many of us are accepting physical and emotional isolation. Gladly, this is something that we now know how to fix. 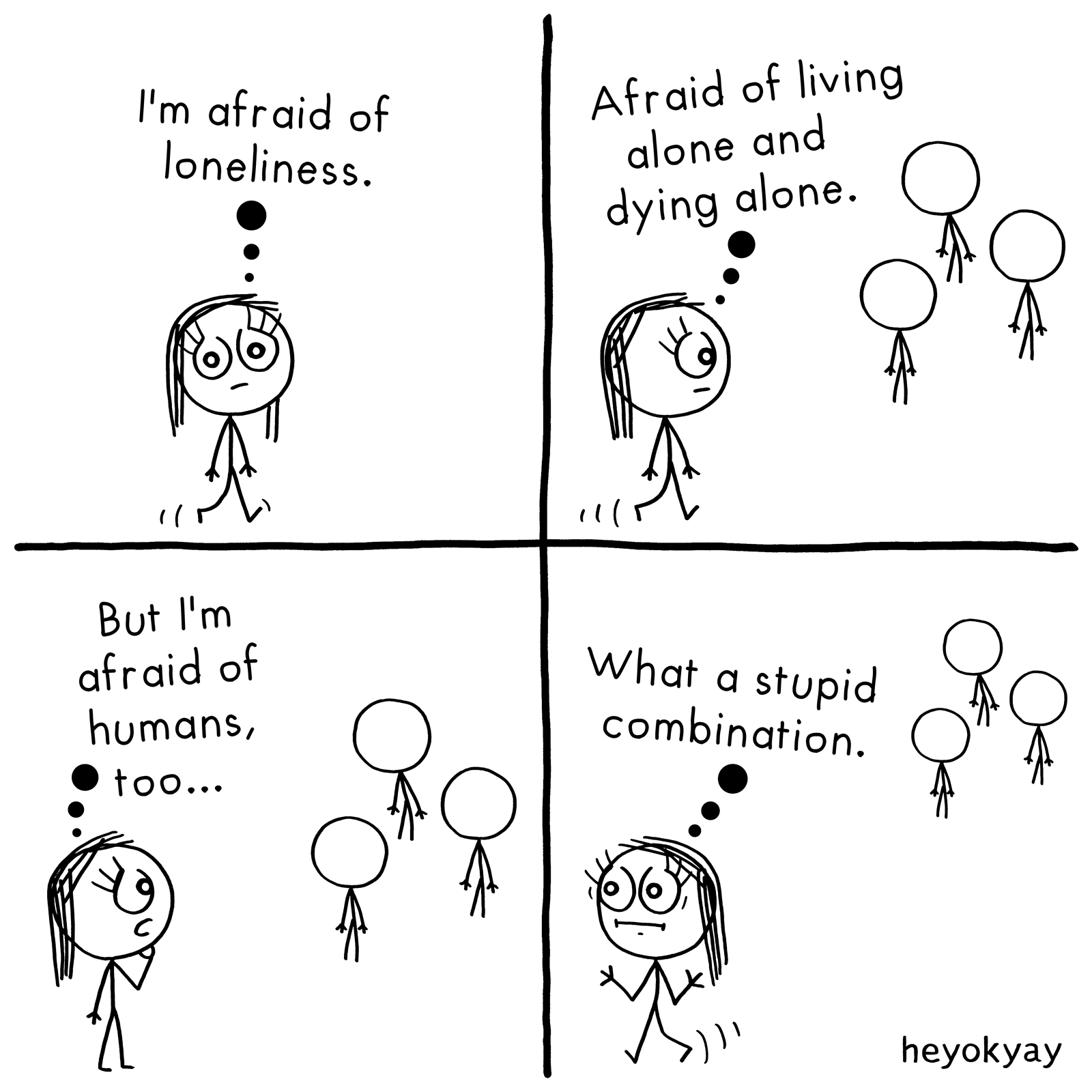