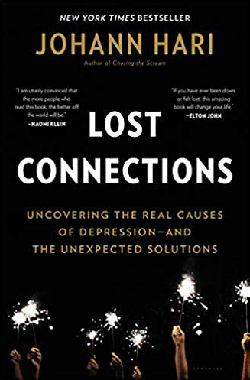 Johann Hari writes in his 2018 book about his personal journey getting off anti-depressants. Along the way he discovers much about the root causes of depression.

In discussing one factor which is a lack of meaningful work, he documents a UK govt study with 17,000 office workers, which found that depression correlated strongly with job satisfaction and how much control/creative input you had at your job.

He also mentions our disconnection from the natural world. Citing several studies on how significant improvements in mood and stress levels can be achieved by relocating stressed people into greener environments, he reminds us that our evolutionary expectation is still to resonate with the savanna, the sea, sun and other wilds of nature. A useful and timely reminder.

One of the these studies was:

"They got people who lived in cities to take a walk in nature, and then tested their mood and concentration. Everyone, predictably, felt better and was able to concentrate more but the effect was dramatically bigger for people who had been depressed. Their improvement was five times greater than the improvement for other people."

Hari devotes a chapter to disconnection from people, which is a subject near the core of Polyvagal theory. Even though his writing is not informed by the later, its nonetheless fascinating to see how various fields of science are all narrowing into the same basic conclusion, that we are wired to connect.

Loneliness was only studied in any systematic way in the 90s, with researcher John Cacioppo's work. Cacioppo carried out a test at the University of Chicago that had never been attempted. They took one hundred people and gave them a pager, a heart rate monitor and a saliva cortisol test kit. At random intervals the pager would signal the participant to record their vitals as well as how lonely or connected they felt. Surprisingly, feeling lonely caused stress levels to rise dramatically. In the same way that being exposed to physical violence did.

"When he put lonely people into brain-scanning machines, he noticed something. They would spot potential threats within 150 milliseconds, while it took socially connected people twice as long, 300 milliseconds, to notice the same threat. What was happening? Protracted loneliness causes you to shut down socially, and to be more suspicious of any social contact, he found. You become hypervigilant. You start to be more likely to take offense where none was intended, and to be afraid of strangers. You start to be afraid of the very thing you need most."

In another study researcher Sheldon Cohen took a group of people, first recorded how many friends and healthy social connections they had, then deliberately exposed them without their knowledge to a cold virus. They discovered that lonely people were three times more likely to catch the cold than people who had lots of close connections to other people. "You need to have a sense of mutual aid and protection".

Hari talks to Vincent Felliti among other notable people. He does neglect any treatment of disconnection from our bodies, perhaps not unusual for a Brit. Even as a journalist, as opposed to a scientist, and even though he misses some important topics, its still interesting reading, and his research style of actually meeting and talking to each of the scientists face to face is refreshing.