The fate of the avoidant 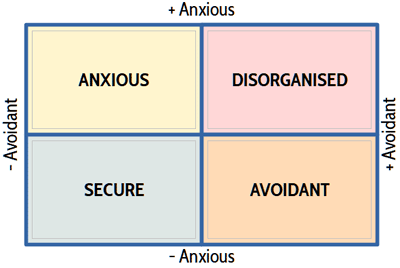 First a quick Attachment Theory refresher. The need for infants to attach was established in the 50s and 60s by Bowlby, Ainsworth, and Harlow. But, this message went directly against the then dominant Freudian model of inner conflict, and against the post war meme of individual freedom. Bowlby was criticized by academics and ostracized by the community of psychology. Hence attachment theory disappeared until relatively recently.

Hazan & Shaver tried to resurrect it in the late 80s and also to show that it was equally applicable to adults. Again, back into the abyss it went. It was only in 2010 when Heller & Levine picked it up again with the release of their book Attached: The new science of adult attachment, that we all got the be able to work with it.

I first read the book in the midst of a difficult relationship, and it was a real eye opener. As well as a description of attachment types, was a couple of notable hints about relationships. First, the secure attached have no trouble forming love relationships regardless of the partners type, so if that's you, you are away laughing. Second, the anxious insecure person rests their fate on choosing a secure attached partner, who will over time bring you into the secure fold, good luck, enjoy (it works BTW). But the book ends kind of abruptly about there (and many other excellent books pick the trail up, see below.

Fast forward three years, when one day we found ourselves in the company of a group of avoidants, I found myself asking the question: what exactly is to be the fate of the avoidant?

Avoidants, in short, grow up trying to be self-reliant, and yet at the same time they feel alone, because they have put their attachment needs in a box.

It's thought that they use a number of different strategies to maintain this apparently irreconcilable situation. First they maintain strong (but unconscious) beliefs about relationships. Eg that self-reliance is normal, that what their partner is feeling is not their problem, that their partner is not good enough for them (even in the face of caring behavior), that there is 'perfect partner' for them out there somewhere. Then they use deactivating behaviors to keep intimacy at bay. Eg: saying i am not ready to commit, focusing on character flaws etc.

We know that they still have attachment needs, because when avoidants separate it is typically then that the feelings of love and admiration return. This can result in a cycle of repeatedly getting closer then withdrawing. Push pull.

In evolutionary terms, it is believed that the avoidant attachment style may have evolved in order to increase the survival chances of humans while living in more hostile environments, eg famine, disease, or disaster. While secure attachment worked best in settled times where collaboration lead to the cultural and economic development of the group, avoidant individuals who were able to detach and be self-sufficient could have been more successful at competing for limited resources.

But back to my question: so what are the pathways for personal development for the avoidant insecure?

As with the anxious insecure, becoming aware of your attachment type is something of an awakening. As we say over and over naming is paramount. Because avoidants rarely search inside themselves for the reason for their dissatisfaction, that is also an essential next step. And then they must go, directly against their inclination to not seek help, and to do exactly that.   "Unfortunately, until they look inward or seek counseling, change is not likely to occur." Heller & Levine (2010).

Along with this increase in self awareness, some other ideas from Heller and Levine: